A FRANCISCAN CULTURE OF CARE

A FRANCISCAN CULTURE OF CARE

Moreover they should respect all creatures, animate and inanimate, which “bear the imprint of the Most High,” and they should strive to move from the temptation of exploiting creation to the Franciscan concept of universal kinship. (OFS Rule, Art. 18)

There is no doubt that we have come out of one of the most challenging and unprecedented years as a global family. Indeed, 2020 was challenging, yet it was a year in which we as a people of faith were called to a much higher standard. We were called to a place of deeper understanding and care for our brothers and sisters, as well as for Mother Sister Earth. Having to shelter at home did wonders for our environment – fewer cars on the roads, less carbon emissions, less pollution in the air. Although that is great news for our common home, it was not an intentional care.

In his message for the 54th World Day of Peace, Pope Francis speaks of this culture of care as a path to peace. There is no doubt that 2020 was a year when there was very little peace. In the midst of a global pandemic, we also experienced racial upheaval and economic unrest, not to mention political tensions during a contentious presidential campaign. We also witnessed our first responders and front-line workers giving care to the hundreds of patients suffering from COVID-19. These caring men and women put their own lives on the line to give care to those who were unable to care for themselves.

In his World Day of Peace message, Pope Francis reflects on the story of Cain and Abel from the book of Genesis: After killing his brother Abel, Cain answers God’s question by saying: “Am I my brother’s keeper?” (Gen 4:9). Cain, like all of us, was called to be “his brother’s keeper.” “These ancient stories, full of symbolism, bear witness to a conviction that we share today, that everything is interconnected and that genuine care for our own lives and our relationship with nature is inseparable from fraternity, justice, and faithfulness to others”.

God created all as relational beings because God models the ultimate relationship – the Holy Trinity. It is in that relationship that the culture of care is made fully known. As the Holy Spirit is the love and care between God the Father and God the Son, we too are called to show that intentional spirit of care and understanding. Not judging, not criticizing, and not pointing the finger of blame; but caring, understanding and showing mercy and compassion.

In his latest encyclical, Fratelli Tutti, Pope Francis reflects on another very familiar story from the Scriptures – the famous parable of the Good Samaritan. This parable reveals the ultimate spirit of care and compassion – and to someone who is considered an outsider. This example of the culture of care is truly what leads to the path of peace. Just think about that poor man who was left beaten and unable to attend to his own needs. Religious leaders passed the man on the side of the road and quickly dismissed him, not even taking the time to see if he needed any care. What if you were that poor man? Our medical workers are the Samaritans during this pandemic. The original Samaritan in the parable did not even think about whether or not those robbers were still lying in wait. He immediately and intentionally cared for the beaten man, even taking him to an inn to give him better care.

Saint Francis was moved to care for the lepers, knowing they were the outcasts of the day. Our Holy Rule states: Secular Franciscans, together with all people of goodwill, are called to build a more fraternal and evangelical world so that the kingdom of God may be brought about more effectively (Art. 14). To build that world, we must intentionally and mindfully create a culture of care. Our Rule also states: A sense of community will make them joyful and ready to place themselves on an equal basis with all people, especially with the lowly for whom they shall strive to create conditions of life worthy of people redeemed by Christ (Art. 13).

Personally, I have felt this most strongly during this past year, as I became a full-time caregiver to my mother, who suffered a stroke in 2019 and a second stroke in 2020. I have experienced the mindful and compassionate care from my Franciscan brothers and sisters. One of the most compassionate acts is to give care to a caregiver. I have truly felt this. When I am ready to give in to the burnout, to the tiredness, I am kept going by my Franciscan family. It reminds me of the story of Moses when he was too tired to raise his arms so his armed forces would gain the upper hand in the battle against Amalek. When his arms grew tired, his people propped them up so the army had the victory (cf. Exodus 17:8-13).

I am truly blessed by the culture of care of the Franciscan family. Let us always keep our arms raised toward Jesus, and when our brother’s or sister’s arms are getting tired, may we always be there, in care and compassion, to hold them up.

Good and gracious God,
may you always grant us the grace
to create and maintain a culture of care that leads to the path of peace.

We pray in the name of Jesus our Lord. Amen. 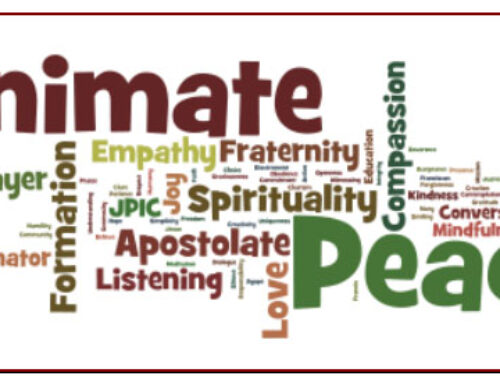 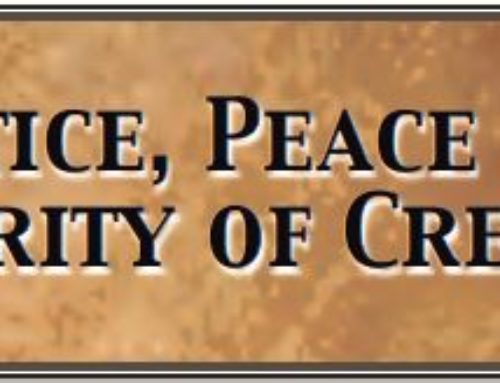 JPIC – When Violence is the Way, We Must Choose and Show Another Way Gallery

JPIC – When Violence is the Way, We Must Choose and Show Another Way 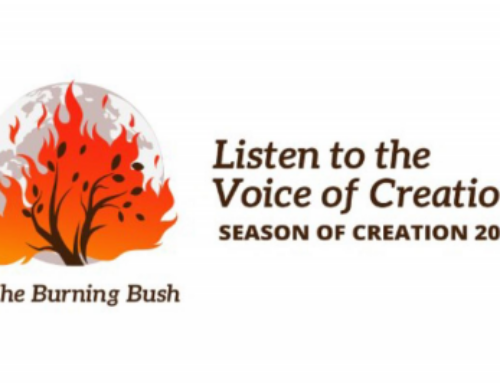