Up to 18 boxes at a time were delivered for days to the home of Patsy Cueva Philipps, OFS,in Corpus Christi.

The spending spree on Amazon was fueled by a response to a call to help refugees being released from detention centers in Laredo, McAllen and San Antonio, TX. Philipps, regional minister of the Los Tres Companeros Region, had spent more than a year dreaming of a way to help people who were crossing the border to seek asylum.

She was inspired to organize a Secular Franciscan service project to aid 1,000 men and women with drawstring backpacks filled with hygiene items and other supplies. Those packs were put together by some 80 Secular Franciscan leaders attending their annual chapter at Pax Christi Liturgical Retreat Center in Corpus Christi.

It all started when Philipps discovered that on her way to work she was passing a detention center in Corpus Christi that housed 120 teenagers. When Philipps called to find out if the Secular Franciscans could help the residents with anything, she was told the government takes care of food and daily living items.

What they could use, she was told, was art supplies, books and games. Working with a wish list that included crayons, coloring books, and prayer cards, the local Secular Franciscan fraternity worked in cooperation with the diocese.

They also hosted a Christmas party. Bishop Michael Mulvey celebrated a Mass at the detention center and directed his homily toward the teenagers.

“He talked about the hard journey they had taken,” Phillips said. “He told them they brought a special gift to us in the same way Jesus and his parents did when they had to leave their country. He told them that they had to deal with more in their short lives than others face in their lifetime.”

After a presentation by an immigration attorney in July that highlighted the severity and urgency of the need to help the immigrants, she felt the call to action. In July, she consulted regional Justice, Peace and Integrity of Creation (JPIC) coordinator Valerie Laubacher.

Both Franciscans knew it was the right time to launch the project. “I knew that the Holy Spirit planted this idea in Patsy’s heart,” Laubacher said. “The Holy Spirit was blessing this.”

Together they brainstormed with members of their region on items that would be helpful for the released immigrants who were legally crossing the border, awaiting a court hearing and traveling to their U.S. destination. Laubacher consulted with her niece on how to start an “Amazon Wish List.”

The women were texting each other at 11 p.m. with ideas. They ordered such items as socks, water bottles, hair brushes, combs, lotion, tissues, toothbrushes, notebooks, pencils, notebooks and wipes.

Another vendor was required to purchase shoelaces because they were not available for bulk purchase from Amazon. Shoelaces are important to immigrants departing from detention centers because they are required to remove them as a safety precaution when they enter, and the items are never returned to them.

Enough health and beauty care items were entered on an Amazon Wish List to fill 1,000 drawstring bags. An appeal for donations was sent out to Secular Franciscans through regional ministers throughout the U.S.

Within two days, most of the items on the initial list were purchased. Philipps added more items. Within a week, 50 fraternity and individual donors from the United States and Guam had purchased all $20,000 worth of items. Another $5,000 was spent on food and household items, such as corn and flour tortilla mix, rice, beans, wipes, laundry soap and floor cleaner.

These grocery items were sent to Catholic Charities to directly distribute to immigrants.

National Minister Jan Parker, OFS, described the effort this way: “Pope Francis says, ‘Love isn’t words, but works and service; a humble service performed in silence without seeking acclaim.’ Our outreach here is simple, handson, Franciscan love in action. With God’s grace these bags of blessings will not only bless those in need, but help open hearts of others to hear the cry of the poor. Our Secular Franciscan Rule challenges us to be instruments of joy, hope and healing, but to also take courageous action in the field of public life. Our bishops explain it this way – we are to walk with both feet of love: the foot of charitable works, which we are doing here, but also the foot of social justice, addressing systemic, root causes of problems that affect many people.” 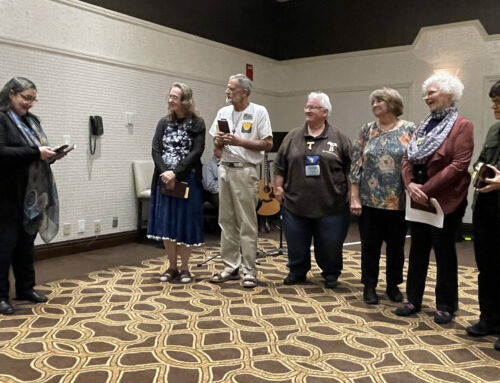 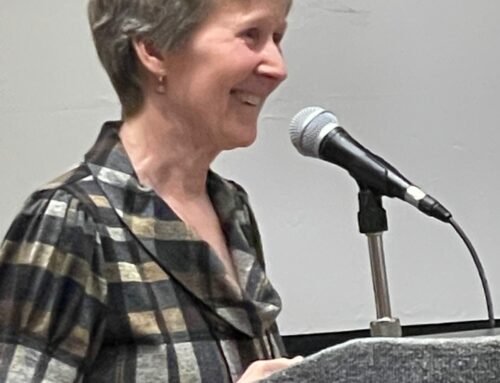 Listen, Discern, and Go Forth, national minister urges in national State of the Order Address delivered at Chapter Gallery

Listen, Discern, and Go Forth, national minister urges in national State of the Order Address delivered at Chapter 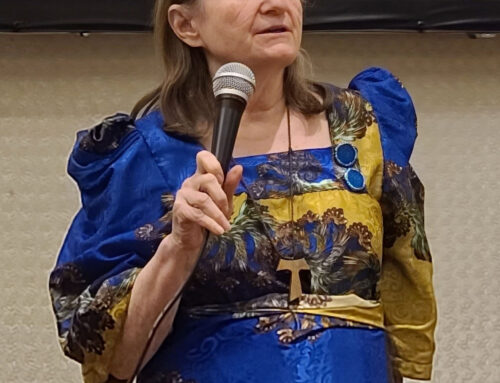