Before the ﬁrst salad was served at the ﬁrst dinner of the Quinquennial, Franciscans were nourished by the students from the Catholic schools in the Phoenix Diocese. On the table, greeting each attendee, was a laminated placemat depicting Francis, Clare, or one of their followers and decorated by one of 1,500 students.

All Catholic schools in the diocese responded to an invitation to create placemats for the event. Betty Holler, OFS, of the Peace Fraternity in Phoenix, led the project. She explained that, “By doing it, we were given the opportunity to talk to the students about saints Francis and Clare. It was fun. We made a lot of road trips, and appreciated the cooperation of the teachers.”

30 diﬀerent placemat designs depicted a variety of Franciscan themes including: St. Francis calming the wolf at Gubbio, Clare turning away the Saracens, Francis receiving the Stigmata, and many others.

Once all the placemats were ﬁnished and collected, Betty laminated them so attendees could take them home. At times she had ﬁve laminators running simultaneously.

While working on the project, the ﬁrst through eight grade students would ask questions like what color should we make Francis and Clair’s clothes? Betty would tell them that we usually think of Francis dressed in a brown tattered robe. Ultimately, the students used their own imagination when coloring the placemats.

Some students were fascinated to learn that Francis’s original name was John, or Juan in Spanish, and that his father renamed him aYer returning from a trip to France.

On each placemat was the following note: “Your placemats were designed by one of 1,500 kids who participated in making this evening a little more special. Please feel free to save yours as a special giY. All the Catholic schools in the dioceses of Phoenix were invited to spend time with a Secular Franciscan, who taught us about St. Francis and St. Clare and helped with our placemats.” Betty loved the opportunity to work with students and to share the stories of Francis and Clare.

Keynote speaker Lori Hinker, OFS, praised Betty for personally reaching out to the local schools with overwhelming results. She encouraged other fraternities to make it part of their mission to reach out to young people.

For other fraternities who might want to try to the project as a way of spreading the stories of Francis and Clare, Betty suggests: 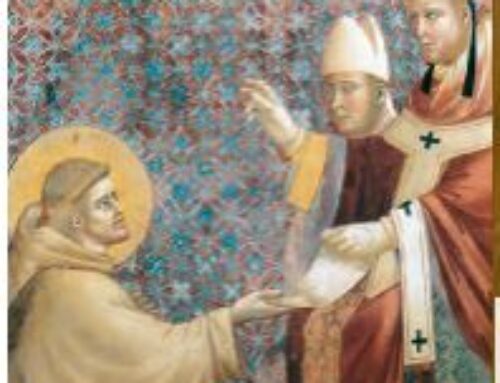